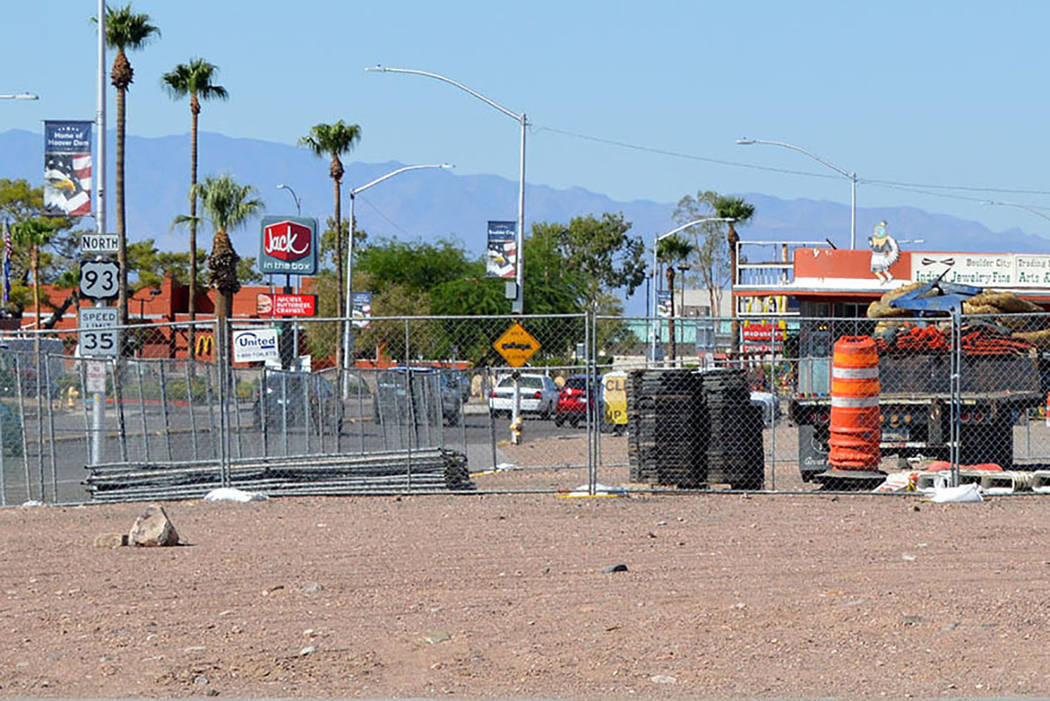 Boulder City's complete streets project started Monday, and its staging area is at the corner of Boulder City Parkway and Buchanan Boulevard. The work will be done in 10 phases and is expected to take 10 months to complete. (Celia Shortt Goodyear/Boulder City Review)

The main drag into Boulder City is set to receive a $17.5 million makeover.

Work on Boulder City Parkway, where U.S. Highway 93 reaches Boulder City, will begin Monday and includes a bevy of improvements.

Landscaped medians, new sidewalks, curbs and gutters, pedestrian crossings and more will be added to the stretch of Boulder City Parkway between Veterans Memorial Drive and Buchanan Boulevard. The road turns into Nevada Way northeast of the intersection.

The Regional Transportation Commission of Southern Nevada, the Nevada Department of Transportation and Boulder City are funding the project, which is expected to be completed in May.

Boulder City will pay almost $600,000 to remove and replace an aged section of the sewer main, replace water services and install new fire hydrants along the route. The city also will cover any additional costs for amenities such as bike racks, benches and trash cans.

Art to pay tribute to the workers who built Hoover Dam will also be part of the renovation project.

There will be eight large metal sculptures depicting the life of dam workers in the 1930s placed in the roadway’s median between Veterans Memorial Drive and Gingerwood Street. The sculptures will be similar to those featured on the Interstate 11 and U.S. Highway 95 interchange.

The sculptures will depict workers carrying their tools walking from Boulder City to work at the dam.

Also featured in the art will be a Labrador-mix puppy that was born in the crawl space beneath a Boulder City building and became known as the Hoover Dam mascot.

Dubbed “Nobody’s Dog and Everybody’s Dog,” the black Lab-mix was given a name by dam workers that could be conceived as racist.

A plaque placed at the site suggests the dog rode to and from the dam site every day with construction workers. It died when it was run over by a truck at the dam in 1942, the plaque reads.

The original plaque at Hoover Dam was removed in the 1970s following complaints that it was racist due to the dog’s name. At the city’s request, another plaque was installed that didn’t include the racially insensitive name. That plaque is still located near the visitor center.